Dear Chicoans,
The Chico State Organizing Committee of 2013 is pleased to announce that this year’s grand Chico State Malam Amal alumni reunion dinner will be held on Saturday, 16th February 2013 at the Tropicana Golf and Country Club (TGCC).

The theme for this year’s reunion will be “RED AND GREY”. This theme was selected as these are the colors of our alma mater and we hope to create an environment that reminds us of our life and stay in Chico, California.

We also are hoping to raise funds for a Chico State Sponsored program for Yayasan Salam which is lead by our very own Alumni member. Yayasan Salam will also welcome contributions from individuals / companies of which the contribution can be tax deductible.
This year’s event will also see golf and bowling played prior to the dinner.

The golf game will be organized at the Seri Selangor Golf Club with a tee off time of 7 am and the fees for Golf is set at RM 180 nett. Bowling will be held at the Tropicana Golf and Country Club to commence at 3 pm and the rates will be the prevailing member’s rate on the day.

The dinner will officially start at 8 pm. However, Alumni members are free to come earlier and arrangements can be made for Solat and lockers for both men and women to be provided for those who may want to choose this option. There will be some games and other events being planned and the dinner will go on to 12.00 midnight. Those who want to volunteer event and performances if they be able to organize one amongst their batches are welcomed.

PLEASE REPLY TO ADEEB at her email adeeb66@gmail.com or SMS to 0123256411 or facebook www.facebook.com/messages/adeebhir so we can tabulate and make a head count of the attendees for dinner/golf/bowling and whether you would like a locker prior to the dinner.
PLEASE COME OUT IN GREAT NUMBERS SO THAT WE CAN ESTABLISH THE SIZE OF OUR ALUMNI AND ALSO TO GET TO KNOW ONE ANOTHER.
Hope to see you there


All 'contributions' towards the Charity Night 2013 will receive tax exemption receipt, issued by Yayasan Salam Malaysia. The account will be audited by Morrison International through their Malaysian franchise, Morrison Azizan Anuarul and Chew.

The golf game will be organized at the Seri Selangor Golf Club with a tee off time of 7 am  and the fees for Golf is set at RM 180 nett. Bowling will be held at the Tropicana Golf and Country Club to commence at 3 pm and the rates will be the prevailing member’s rate on the day.

You have a few options to 'pay' for your contribution/entrance fee.

For Option 1-3, after you have printed/scanned your confirmation page, come back here and click here to send to adeebhir66@yahoo.com.


Posted by CSU Chico Alumni Malaysia at 5:08 AM No comments:

Posted by CSU Chico Alumni Malaysia at 5:05 AM No comments:

Nothing's Small for Some Small People 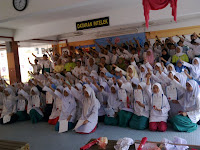 Fruit of our labor and kindness saw more than 400 people benefited through a motivation camp conducted by Yayasan Salam Malaysia from 9 to 11 July at Sek Keb Bukit Raya, Hulu Langat. The camp partially funded by the money collected during our Grand Reunion Dinner.

Since I was scoring points as a minor celebrity during the camp, I decided to test my popularity in a more 'festive', Chico fueled promo. It was Saturday night and we were waiting for parents to arrived for second night of parenting skills session. I had been very modest in promoting Chico State Alumni so far, so I dolled myself up (sprayed cologne on my brand new Alumni t-shirt) and set out at 8:30pm to greet the trickle in arrivals. It was a unmitigated alter-ego booster. Not only were all of the parents commented on the nice t-shirt and wanted to buy for themselves, but guys were commenting that I looked so 'alim' to assume a graduate from California. I kept rewinding my Chico State Alumni Grand Reunion Dinner story, many many times. I shared some of my Chico experience with a group of them - ustazah, some young wives, cikgis(female teachers), none of whom would meet my eye. From a safe distance these ladies stared at you like you have three ears, however in an intimate setting they look everywhere but directly at you. If you wanna have some good clean fun, you could pretend to look at something else and when you’re certain that they’re looking at you, you whip around to look at them and they almost break their necks trying to look somewhere else. This game provided non-stop delight during my tips on parenting talk. By far the night was the most engaging session before taking my leave, giving way for my trainer to conduct the 'recall' session. 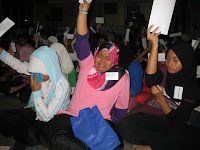 The kids and parents were having parallel 'recall' or x-files session, where they were being bombarded with emotional roller-coaster monologue, videos and soul-searching flash-back. The kids were made to write a 'wasiat' and the parents were holding 'treasured gift' which they gave to their kids when they were younger, reminiscence the love, hope and dream they had upon their kids. 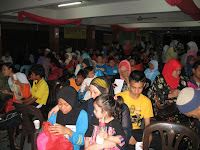 The highlight of the night was the rendezvous of emotionally charged parents with their kids and the untold episode unfolded. Instant gratification I felt, that our small contribution made such significant impact in these small people and their parents. I hope to see a lot more people with big heart, give a lot more small contribution, help us to help a lot more small people and make a difference.
Posted by CSU Chico Alumni Malaysia at 1:23 AM No comments: 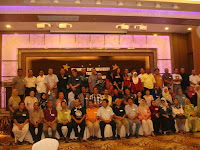 Its funny how your brain can relate and register a certain smell of a place? The same goes to certain songs which will bring a blast of memories? Chico got this special smell of dry leaves and Cool n the Gang's song "Cherish". And I shall cherish the days forever!

Words from a man of wisdom,"if a person draws a circle to exclude you, you should draw a bigger circle to include everyone in". And we did just that - we drew a huge circle around ourselves to include members from 75 to 95 batches! What a great night.


When we were planning for the night, I was worried that we did not put in much attention on entertainment. I was dead wrong! The snippets from batch spokepersons provided 'close-to-our hearts' cozy promptus. Even my kids kept paraphrasing the 'Chico jokes' the day after. The 'no-choice', 'harta peninggalan', 'super salad/soup or salad', 'water/H2O', et all were further 'discussed' over my family breakfast at our favorite Warong Wak Ghani. Our own Hisham belting out a number from "lagu zaman abah' was admired by my kids and wondered whether he has recorded any album! 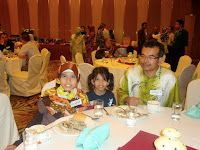 I further added my story on 'chilled to the bone' wuduk in icy lake during our summer camp with 'brothers'. And Narita Airport incident where we triggered security alarm, when we were trying to find exit door!

It seemd now that my kids are so inspired to further their study in Chico!


I was worried that we did not have nice glossy program book, and colorful wrapped prizes to give to winners of table games and all. But then again I was wrong. Bottled 'Mountain Dew' was Azman's (the organizing Chairman)idea was brilliant. (Please note that we did not endorse or promote any particular soft drink) Not only it trimmed out cost, but also bring back good memories of barbequing at Bidwell Park. My kids did asked, how did we consumed cold Mountain Dew in chilly winter? And how did you 'tayyamum' with snow? 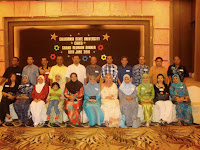 I am glad that I brought my kids along, and I am pretty sure my non-Chico second-half (as I failed miserably in courting from 'no-choice' pool) will be there at 2011 annual Reunion Dinner.

Post Grand Reunion Dinner discussions on Facebook (as I tried to keep up with some of them), really inspired some of us to organize another "Big Grand Reunion Dinner 2011" and smaller get together pretty soon. And some ex-Chicoans already 'volunteered' to be the organizing committees. Lets keep the ball rolling. Talk about rolling the ball, I do need serious practice at bowling alley. My kid scored better than me and I was subjected to 'abah dah tua, tak larat baling bola' for a couple of days subsequently. 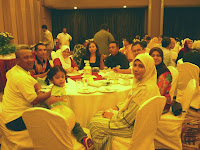 Parapharasing a conversation between an American and British soldiers about jet fighter pilot from the Pearl Harbor,"there is nothing more dangerous than a heart of a volunteer". I am honored and privilaged to be part of the event. Thank you.
Posted by CSU Chico Alumni Malaysia at 9:18 PM 1 comment:

All colors available in XL, L, M and S for adult. Please note that these are US standard sizes, which means one size bigger than Malaysian sizes. Kids sizes are 36, 34, 32, 30 and 28. Also available in 5 different colors.

RM20.00 per t-shirt for adult and RM19.00 for kids.
You may place your order via email to mdghani.ibrahim@gmail.com or online order form below.

To check on your earlier order placed here, please click here
Posted by CSU Chico Alumni Malaysia at 6:20 AM 1 comment: